Mustard [French: Moutarde Noire, Spanish: Mostaza Negra]  is a member of the Brassica family of plants. Mustard derives its name from latin name mustum ardens meaning burning must – spicy heat of crushed mustard seeds and French practice of mixing the ground seeds with must – unfermented juice of wine grapes.

Mustard seeds and leaves are edible parts of this plant. Mustard seeds are commonly used as spice. In some parts of India, leaves of mustard plant are used as vegetable. Mustard oil prepared from mustard seeds and used in food preparation in many parts of country. Mustard essential oil is also popular for its various health and medicinal benefits.

This small seed is full of nutrition and health benefits. Some key benefits of mustard are listed below: 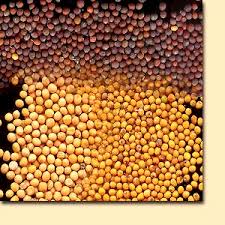 Mustard seed is considered as stimulant and aids digestion. It is known for its digestive, laxative, antiseptic, and circulative stimulant properties. Mustard has been traditionally used as folk remedy against arthritis, rheumatism and inflammation.

Mustard acts as appetizer and boosts hunger, and considered as a digestive irritant. It irritates inner lining of stomach and intestine and simulates secretion of digestive juices giving a feeling of hunger.

Mustard seeds contain ample amount of glucosinolates, a phytonutrient for body and other enzymes which studies have shown to have anti cancer properties and effective on gastrointestinal and colorectal cancer.

Mustard plasters are applied to chest as folk medicine to aid clearing sinus and decongest the lungs. The essential oil of Mustard is used to treat cases such as Pleurisy and Pneumonia.

Anti cancer properties of mustard can be attributed to presence of Selenium and Magnesium. Selenium is considered essential nutrient for body and help to reduce severity of asthama, prevent cancer, and treat symptoms of arthritis. Manganesium is known to reduce high blood pressure and effective over heart disease.

Mustard oil protects teeth from germs if rubbed on gums and makes gum strong. Mustard plasters were applied to cure toothaches and a number of ailments.

Mustard oil helps to reduce hair fall through improved blood circulation if it is massaged on scalp. It is also considered effective over dandruff.

Health benefits of Kokum can be attributed to its medicinal properties to aid digestion, provide relief on flatulence, heat strokes,...