Drone Prathap NM, a resident of Bengaluru, was arrested on Monday for allegedly violating home quarantine norms. Rohini Katoch, Bengaluru South Deputy Commissioner of Police (DCP), told TNM that Prathap was picked up by a team of police officials from Mysuru on Monday. He was placed in institutional quarantine in Bengaluru.

Prathap had recently traveled from Hyderabad to Bengaluru and was directed by officials to remain in home isolation at Talaghattapura in Bengaluru. However, he violated the norms by leaving his house to go to the studio of a private television channel to give an interview. He was missing since Saturday, but police officials tracked him down on Monday to a lodge in Mysuru’s Mandi Mohalla area. His father convinced Prathap to cooperate with officials. He was using a different mobile number which was not registered with officials for the quarantine process.

Prathap is referred to in the media as ‘Drone Prathap’ for claiming to have extraordinary achievements, including the claim that he built 600 drones at the age of 22. Many news organizations even published his claims, which stated that he had built 600 drones from e-waste.

However. he was in controversy recently following a television interview with BTV. He showed a photograph of him posing with a drone as proof of his work when the anchor questioned him. This can be watched at around the 33-minute mark of this video.

See also  Why do we get Hiccups, and How do Get rid of Them?

A German company BillzEye stated on July 17 that the drone shown by Prathap was in fact built by BillzEye and exhibited at CEBIT 2018, Hanover Exhibition Center.

What did Bill Gutbier say about this?

The statement by Bill Gutbier, owner of Germany-based BillzEye, stated that Prathap asked questions about the drone and requested if he could click a photograph with the drone named ‘BETH-01’. Bill clarified in his statement that Prathap had nothing to do with the design, development, manufacture, or distribution of the drone and that it was constructed and manufactured by his company. He said that he could prove it by sharing many documents, Computer-aided design (CAD) files, and photographs.

Prathap had earlier claimed he was awarded the “Albert Einstein Innovation Gold Medal” at CEBIT 2018 held in Germany. Several news organizations reported this achievement without verification and are now making changes to their story after receiving clarifications from the event organizers.

After he shared a photograph on his Instagram page posing in front of a drone, there was another controversy. A Reddit user wrote to officials in ACSL to enquire whether Prathap was involved in building the drone. The user shared the response given by ACSL COO Satoshi Washiya which stated that the drone in the image was built completely in-house by ACSL. 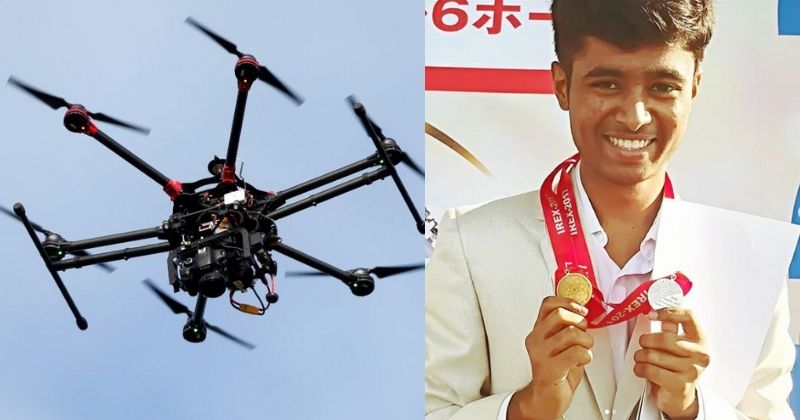 Is Drone Prathap working with DRDO?

However, upon examination, the logo of Japanese-based ACSL was visible.

Another claim which media made and went viral on social media last week suggested that Prime Minister Narendra Modi had ‘inducted’ Prathap into the Defence Research and Development Organisation (DRDO). The claim backed up by infographics created by fake news portal Postcard News was circulated on social media sites. Prathap himself admitted that this news is fake in a video posted on his Instagram account. However, he said that the news debunking his claims of building drones is also fake.

“I don’t have any background and I come from a farmer’s family. I know what I am. Regarding all the news stories, I will give answers along with documents at the appropriate time and place,” he said in the video. Pratap has also insisted that he has made many of the drones himself.

After several doubts were raised regarding the achievements of ‘drone boy’ Prathap, he appeared on a news show hosted by Kannada channel ‘BTV News Kannada’ to issue clarifications and furnish proofs.

In an interview spanning over 40 minutes, Prathap flashed his photographs with drones purportedly made by him and presented several certificates as proofs of international awards he has claimed to have won in the past.

Prathap NM, aka Drone Prathap, was touting his own laurels for almost two years across Karnataka in various events regarding his hard work, determination, and rags to riches story. Any person with an ounce of scientific temperament could easily tell this guy was a con artist, a dumb one at that too. Various news articles, TV channels had covered him extensively without any fact check. Finally, a journalist called Raju Das did some digging and exposed this guy for who he really is. Kudos to the journalist for exposing a hack that could have eventually conned his way to an MLA/MP seat. It goes on to show that online news articles, TV channels are just raucous Facebook posts. It is sad to see that such people were allowed to give speeches to young students—hopefully, no more of his garbage.