Asafoetida or asafetida is a hard, dry resinous gum derived from saps of roots and stem of several species of Feruala, a giant fennel. Asafoetida has pungent and strong smell when raw. It cooks well with oil and leaves a distinct flavor and aroma to oil. Asafoetida flavor goes well with turmeric, cumin seeds and other spices.

It gets its names mainly due to its stinking odour.  Aza in Persian means resin, while foetidus means stinking in Latin. It is also known as asant, food of the gods, giant fennel, jowani badian, stinking gum, Devil’s dung, hing and ting

It is believed that Asafoetida is native to ancient India or current Afghanistan. This spice is mainly cultivated widely in India. Some records mention that Alexander the Great carried this spice – “stink finger” to west in early 4BC.  It had been used as spice in ancient Rome. In India, it has been used as medicine and cookery for ages.  Singers during the Moghul era in India were quite popular and were believed to consume spoonful of asafetida with butter to enhance their voice. 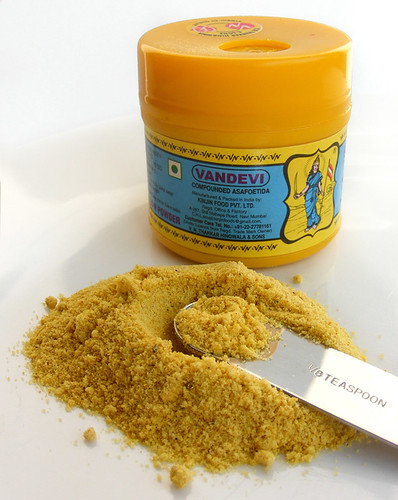 Typical asafoetida contains about majority resin and endogenous gum which contain  asaresinotannols, ferulic acid and umbelliferone. Apart from its flavor, it is used as a digestive aid, food as a condiment, and in pickles. It typically works as a flavor enhancer and, used along with turmeric, is a standard component of Indian cuisine, particularly in lentil curries, such as dal as well as in numerous vegetable dishes. It is used in many vegetarian and lentil dishes to add both flavor and aroma, as well as to reduce flatulence. It is also used as substitute for onion or garlic for adherents of Jainism, who don’t eat onion or garlic.

Asafetida is known as an antidote for flatulence, digestive aid, antimicrobial and is also prescribed for respiratory conditions like asthma, bronchitis and whooping cough.

In Europe, a small piece of the resin is tied on string and hung around neck to protect children from disease. Its sulfurous smell is believed to calm hysteria. It is also used in preparation of mixture along with other spices as cure for alcoholism.

Some of the Asafoetida benefits are listed below:

Asafoetida is traditionally used as carminative. It is effective over various digestive disorders like flatulence, colic and stomach spasm, acidity, intestinal worms, digestive weakness. Minute quantities of Asafoetida in food are beneficial for proper digestion.

Asafoetida is a good anti-inflammatory and an anti-oxidant agent and helps in relieving various stomach related disorders. Asafoetida is also considered effective in treatment of cholera.

Asafoetida was used to fight Spanish influenza pandemic of 1918. Research also shows that roots of Asafoetida produce natural drug compounds effective over swine flu. Asafoetida along with lemon juice is used in case of toothache.

Asafoetida is effective on respiratory conditions like asthma, bronchitis and whooping cough.

Asafoetida has been traditionally used in treatment physical and emotional symptoms related to mood swings and depression. Pungent sulphurous smell of Asafoetida is believed to calm hysteria and Epilepsy.

Traditional medicines use Asafoetida in treatment of problems in women like painful menstruation. There is no adequate research, but Asafoetida has also been reported to have contraceptive activity.

Other health benefits of Asafoetida:

Asafoetida is considered opium antidote and administered on opium addicts. It is also believed to have sedative properties and considered helpful in lowering blood pressure.

It is because of health benefits and medicinal uses of Asafoetida that makes it a valuable herb and helpful in maintaining overall health.