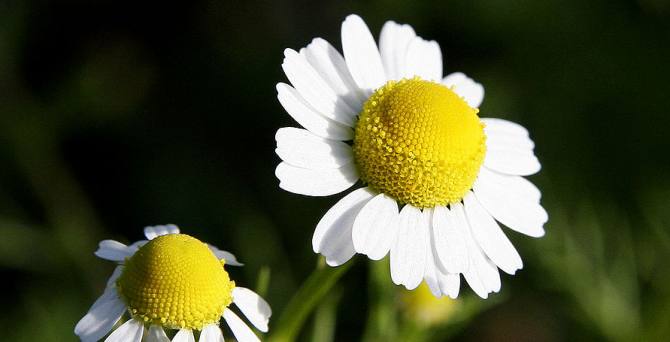 Chamomile, a health boosting herb used for several centuries is highly valued for the presence of antioxidants and also for its medicinal properties. It is used to prepare a tea that is popular for its ability to soothe upset stomach, heal skin conditions, fight diabetes and help with many other health conditions. Roman chamomile and German chamomile are the two types of chamomile used for promoting good health. This herb is available in the form of infusion or tea, dried flower heads, tinctures, liquid extract, and also as an ingredient in ointments and creams.

Here are some of the amazing health benefits offered by this herb:

Chamomile contains a chemical known as apigenin, which according to scientists has the power to reduce the lifespan of cancer cells and prevent its spreading. Abnormalities in RNA are considered to be the causative factor of about 80 percent of the cancers. The  apigenin in chamomile assists proteins in correcting this abnormality. Chamomile  was also found to induce apoptosis in cancer cells without affecting the normal cells.

Chamomile is a herb that has moisturizing, healing and antioxidant properties, which makes it a great remedy for skin problems. It is widely used in many cosmetic and skin products. Chamomile tea has the ability to lighten your complexion and provide a natural healthy glow. It is exceptionally high in antioxidants that protect your skin from damages caused by free radicals. Oxidative stress caused by free radicals is a main factor that leads to premature aging. Thus by preventing free radical damage, Chamomile helps in keeping your skin healthy and youthful. Chamomile has antibacterial and anti-inflammatory properties that help in preventing acne breakouts. If you have under eye dark circles, then placing chamomile tea bags under the eyes can help eliminate them.

Common cold, a mild infectious disease affecting the upper respiratory system is caused by viruses. If not treated properly, it may lead to pneumonia and other serious respiratory problems. Chamomile is popularly used as an effective remedy for treating colds. Research have shown that drinking chamomile tea may help relieve colds. Inhaling steam with chamomile extract has been found to be beneficial in reducing the symptoms of common cold.

Chamomile is well known for its healing properties. According to a study conducted on people who underwent dermabrasion of tattoos, chamomile was found to be effective in wound drying and speeding up the process of epithelialization. Ancient Greeks, Romans, and Egyptians used chamomile tea as a salve on wounds for promoting faster healing. Another study on rats found out that when these animals were given chamomile flavored water, healing of wounds took place at a faster rate, especially for burn wounds. The wound healing effects of this herb is due to its antimicrobial, anti-inflammatory and antioxidant effects. To use chamomile for healing wounds, you can either drink chamomile tea, or apply a paste of dried chamomile flowers on the affected area.

Chamomile has soothing properties that may be helpful in reducing the discomfort caused by acid reflux. This condition is caused when bile flows from the stomach into the esophagus. This backward flow of bile leads to irritation of the lining of the esophagus, causing heartburn and discomfort. The flower heads of the chamomile plant is high in volatile oils, flavonoids and mucliages that may be effective in soothing the lining of the esophagus. Chamomile also produces a protective effect against stomach acid by reducing the activity of pepsin in the gastrointestinal tract. Drinking chamomile tea reduces inflammation of the esophagus caused by acid irritation.

Another important benefit of chamomile is that helps regulate blood sugar levels and thus control as well as prevent diabetes. According to a study published in the Journal of Agricultural and Food Chemistry, drinking chamomile tea may be beneficial in regulating blood sugar. Chamomile may reduce blood glucose levels and increase storage of glycogen, in the liver. The authors of this study suggest that there is an association between consuming chamomile tea daily and preventing hyperglycemia and the progression of diabetes. This tea lowers the levels of blood sugar and can help prevent further complications associated with the condition, such as nerve damage, kidney disease, blindness and circulatory damage. Chamomile has also been found to protect the beta cells in the pancreas from oxidative stress caused by hyperglycemia.

Chamomile is usually recommended for the treatment of anxiety and insomnia because of its calming and sedative properties. These effects of the herb can be attributed to the presence of phytochemicals in it. The phytochemicals work in three ways – by influencing the functions of the neurohormones, by modulating the transmission of neurotransmitters in the brain and by binding to GABA receptors. The GABA receptors, neurotransmitters and neurohormones, all help promote calmness and also induces sleep.  To get a good and restful sleep, take a cup of chamomile tea before going to bed.

Studies have revealed that the regular consumption of chamomile tea increases the level of hippurate, a breakdown metabolite of phenolic compounds that fights off bacteria and improves immunity. The chemical compounds found in this herb may increase the production of  B-lymphocytes and macrophages, which are white blood cells that destroy microbes like bacteria, viruses and fungi.

Studies suggest that the compounds found in chamomile tea may help provide relief from menstrual cramps. Drinking chamomile tea regularly leads to the increase in levels of hippurate and glycine in the urine. While hippurate shows antibacterial effects, glycine acts as a nerve relaxant and helps relieve muscle spasms. The higher levels of glycine may help in relaxing the uterus, thus helping to relieve menstrual cramps.

Chamomile contains certain compounds that shows mild diuretic properties. Diuretics promote frequent urination and cause your body to lose water, which further helps in weight loss as well as in lowering high blood pressure. It is also beneficial for other medical conditions like liver cirrhosis, congestive heart failure, inflammatory conditions and kidney diseases.

11.  Chamomile is an anti-inflammatory agent

Chamomile has anti-inflammatory properties and has been used as a herbal remedy for reducing inflammation. According to a study published in “ Life sciences”, chamomile produced cell reactions analogous to those produced by non-steroidal anti-inflammatory medications. This property makes chamomile beneficial in reducing swelling, toothaches, skin problems etc. Chamomile is often used topically because the essential oils and flavonoids in it penetrate deep into the skin layers and reduces inflammation. To reduce inflammation, you can add chamomile tea to a warm bath and then soak the affected area. Another method is to soak a compress in the tea and then apply it on the inflamed area.

If you are trying to lose weight, chamomile is a great herb that can help you with your weight loss goals. It acts as an appetite suppressant and its diuretic properties help in weight loss by preventing fluid retention. Chamomile also has cathartics effect, which helps in detoxifying and removing the toxic wastes from your body. Furthermore, The high levels of nutrients and antioxidants in this herb provide a healthy and balanced diet to your body.

Chamomile is popular for its benefits as a digestive aid. Not only does it help with digestion, it is also a wonderful remedy for many gastrointestinal disorders. Drinking a cup of chamomile tea after meal helps in easy digestion and also in treating a wide range of digestive problems such as abdominal bloating, gas, colic, diarrhea, constipation, irritable bowel syndrome and stomach ulcers. Chamomile contains antispasmodic properties that helps with constipation by relaxing the smooth intestinal muscles, thus allowing the easy passage of stool.

Bladder infection is a common urinary infection affecting both men and women. It is caused when bacteria enters the urinary tract and attaches to the lining of the bladder. Here the bacteria grow and proliferate, causing infection. The symptoms of this condition include frequent urination with pain, unusual abdominal pain or pressure and blood-tinged urine. Chamomile is a great remedy for curing bladder infections because it has antibacterial and anti-inflammatory properties.

How to use chamomile

Although chamomile is available in the form of pills, tinctures and extracts, it is most often consumed as a tea. To make chamomile tea, add chamomile leaves in boiling water. Cover the water and allow it to boil for another 2 minutes. Remove from heat and then allow the liquid to steep for about 15 minutes. Strain the tea and drink daily. You can improve the flavor of the tea by adding lemon juice and honey. Drinking 2 to 3 cups of this tea between meals helps in reducing stress and tension. Gargling with tea is helpful in treating mouth sores and gingivitis. Inhaling the steam of the tea offers relief from cold and cough.

Chamomile is one the herbs that has been used since ancient times for improving health. It contains several bio-active constituents that attribute to its medicinal properties and importance in the cosmetic industry. Research has brought to light the  various properties of chamomile including its antioxidant, anti-inflammatory, anti-cancer, anti-allergenic, antibacterial and sedative properties, thus confirming the long held reputation of the herb.

Incidences of Vitamin D deficiency has been increasing recently. This has to be blamed more to our lifestyle. We do...