Onion is one of the oldest cultivated crop. Bulbs from the onion family are thought to have been used as a food source for millennia. In Bronze Age settlements, traces of onion remains were found alongside fig and date stones dating back to 5000 BC. Records show that onions were cultivated around 2000 years ago in ancient Egypt. It is believed that Pyramid workers fed on radish and onion. The ancient Egyptians worshipped onion as they believed that spherical shape and concentric rings symbolize life. Then Onion was used in religious and funeral offerings. Roman gladiators used to rub onion to firm their muscles. Columbus introduced onion to North America, where he found that native Americans used wild onions. During 16th century, onion was prescribed to cure infertility in women.

Onion has been described as the dynamite of natural foods. Compared to other fresh vegetables, it is relatively high in food value and moderate in protein content. There is considerable variation in nutritional value of onion depending on variety and stage of maturity.

Onion is a good source of Vitamin C, Chromium and dietary fiber. A cup of chopped onions provides 20% of dietary value of vitamin C, 10% vitamin B6. Onion also provides minerals like Chromium, Manganese, Molybdenum and potassium.

The bulbs and fresh herb of onion yield around 0.005% of an essential oil. Onion contains sulphur containing compounds which are responsible for pungent odour and various health benefits. Various allyl sulfides including diallyl sulfide, diallyl monsulpfide, diallyl trisulfide, allyl propyl disulfide. Onions are also rich source of polyphenols, including the flavonoid polyphenols. Flavonoids like Quercetin and Anthocyanin are present in onion. Health benefits of onion are available due to presence of sulphur compounds and quercetin.

Onion is one of civilizations oldest medicines. It is because of health benefits of onion, that in ancient Mesopotamia, onion was believed as cure of all illness. Physicians in ancient Egypt prescribed onion on various diseases and was considered stimulant, diuretic, expectorant and rubefacient. Leaves of onion are diuretic, carminative, digestive, emmolient, tonic, antispasmodic, mild laxative and aphrodisiac in nature.

Health benefits of onion on respiratory diseases: Onion is mucus clearing food. It liquefies phlegm and prevents from further formation. It has been long used as a remedy for cold and cough, bronchitis and influenza. Equal amounts of onion juice and honey should be mixed and 3-4 teaspoons should be consumed daily to treat these conditions.

Onion as a treatment for Asthma: Quercetin, a compound present in Onion is one of the main treatments for conditions like Asthma due to the anti Histamine action of Quercetin. 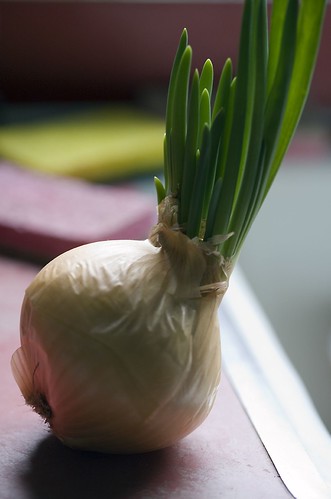 Heart disease : Health benefits of onion on heart disease can be attributed to presence of essential oil such as allypropyl disulphide, catechol, protocatechnic acid, Calcium, vitamin C and other nutrients. Onion is regarded as preventive against heart attack.

Anti bacterial and anti microbial properties of Onion – Onion and other Allium vegetables are characterized by their rich content of thiosulfinates, sulfides, sulfoxides, and other odoriferous sulfur compounds. The cysteine sulfoxides are primarily responsible for the onion flavor and produce the eye-irritating compounds that induce lacrimation. The thiosulfinates exhibit antimicrobial properties. Onion is effective against many bacteria including Bacillus subtilis, Salmonella, and E. coli. Onion is not as potent as garlic since the sulfur compounds in onion are only about one-quarter the level found in garlic.

Skin diseases – Onion is irritating to the skin and stimulates the circulation of blood in the mucous membrane. Warts also sometimes disappear when rubbed with cut onions. Roasted onions are applied as a poultice to indolent boils, bruises and wounds to relieve heating sensation and bring the boils to maturity.

Ear Infection – Onion juice can be beneficially used in treatment of pus formation in ear caused by middle ear infection. Anti bacterial properties of onion helps get rid of ear infection. For earache, a couple of drops of fresh onion juice poured into the ear.

Diabetes – Onion have been used as a treatment for diabetes. Recent research studies conducted have proved that onion can lower blood sugar in diabetes. Onion affect the liver’s metabolism of glucose or prevent insulin’s destruction. Allyl propyl disulphide and allicin are believed to be hypoglycemic in nature.
Remedy for Cholera – Onion is an effective remedy for cholera. Onion pounded with pepper is given to people suffering from cholera, it allays thirst and restlessness making patients feel better. It also reduces nausea and diarrhea. Onion can help prevent cholera infection during epidemic. During cholera epidemic, Onion pieces are scattered all over houses.

Pain killer – Onion possess pain killing properties. It is beneficial in treatment of pain in eye. It is valuable medicine for suppressing pain resulting from piles. Occasionally, blind piles swell up and cause torturous pain to the patient. It becomes extremely difficult for the patients event to sit. External application of paste made from half baked onion is beneficial in such cases. Similarly an ointment made of onion and turmeric also makes and effective  application over pile masses.
Dsymenorrhoea – Onion is also valuable remedy for painful menstruation. Onion soup made from onion boiled in water, with salt or sugar added for taste should be consumed in treating this condition.

With all these health benefits of onion, it is aptly called the dynamite of food.

Precautions: Consuming large amount of Onions can lead to stomach distress and gastrointestinal irritation including gas formation and heartburn. Recent studies show that onion have tendency to reduce the number of red cells and lower haemoglobin. During peeling of onion, there is release of volatile oil containing ally propyl sulphide which brings tears. To avoid this, onion can be peeled under running water or dipping onion in hot water for minute