“Staff of life” is what cereals are called, is only because they have become integral part of daily food. Cereal word is derived from Greek word Ceres, the name of Roman goddess of harvest and agriculture. It was around 10000 years ago, when first civilized men started agriculture and cereals were amongst first crop they cultivated. Ever since then, cereals have been important part of human food. Today, cereals have been grown in large quantity and important source of food energy. Rice , wheat, corn, barley, oats, sorghum, millets, ragi, bajra, rye, fonio are some of cereals used across the world. Depending of climatic condition and food habits of people, various cereal grains are produced across the world. Each country or infact each region within the county seems to have different cereal culture. Breads made of wheat are used across Europe and Northern parts of India, while rice is consumed mainly in countries from East and South Asia.  Millets and sorghum are popular in dry regions of Asia and Africa. Maize is staple cereals for people in Africa and America.

Cereals are nothing but grasses with their fruit or grains which are edible. Botanically, cereals are members of monocot family Gramineae with a type of fruit called caryopsis. This grain stores within itself various elements essential for germination including carbohydrate, protein, fat, minerals and vitamins. These stored nutrients are responsible for nutritional value of grain and health benefits of cereals.

In understanding the health benefits of cereals it is essential to study the structure of grain. Cereal grains are single seeded fruits called as Caryopses in which seed coat is fused with fruit coat. The structure is very much similar in all cereals grains. After the husk or chaff or the coarser scaly material or outer most cover on the grain is removed, the whole grain is exposed. This grain consists of essential three parts – Barn, Endosperm and germ. Cereal grain structure can be visualized as an egg.  Barn is similar to the shell of egg, while endosperm is similar to the egg white. Germ which is the innermost part of the whole grain is similar to yolk.

Barn is the outermost hard layer and consists of two layers – aleurone and pericarp. Barn is generally dark in colour and in process of milling, some part of barn is removed.  Barn is rich in dietary fibre and essential fatty acids. It contains significant amount of starch, protein, vitamins and minerals. Due to high oil content in barn, barn is responsible for reduction of shelf life of grain. Rich bran along with essential oils also contains antioxidants and imparts health benefits. Aleurone layer in barn contains high fiber content, phosphorus and other minerals and good source of Vitamin B. 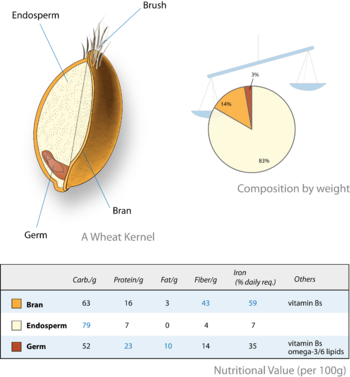 Endosperm is mainly thick celled starch granules. It surrounds the germ and provides it with energy source – carbohydrates during germination. Endosperm is the largest part of the whole  grain by weight and forms important part of our cereal diet. Flour is mainly endosperm of the cereal. During germination bran secretes amylase, an enzyme that breaks down endosperm starch into sugars.

Germ is basically the embryo of the seed and grows into new plant in germination. Germ also stores various proteins, essential oil and vitamins. (References 1, 2):

The World Health Organization (WHO) and any other countries stress the nutritional and health benefits of cereals as a foundation of a good diet. From a culinary point of view, consumers see a great variety of grains included in menu offerings from soups and salads to dessert. Ongoing medical research confirms various health benefits of cereals, particularly in reduction of heart diseases and cancer.

Cereals in its natural form or ‘whole grains, are packed with energy and vital nutrients. They are vital source of carbohydrates, proteins, fats, minerals, vitamins and phytochemicals – almost all types of nutrients.

Major portion of cereal is carbohydrate, which makes cereals economic source of food energy. They provide around 70-80% of daily energy requirement. Also cereals are cheap and widely available. Bran of cereals contain both soluble and insoluble fiber which helps in proper bowel movements. Fibers are also required to slow release of glucose from food and thus maintain sugar level in body. Fatty acids in cereals are mostly concentrated in germ and barn. These fatty acids include palmeteic acid, oleic and linoleic acids.

Cereals also contain proteins, however protein content differs from cereal to cereal. Even different variety of same cereal may contain different amount of protein.  Types of proteins present in cereals are known as Gluten proteins, which include albumins, globulins, prolamines gliadins and glutelins. Gluten offers elasticity and flow properties, which is essential for making bread from cereals. However cereals are deficient of some amino acids like lysine, hence they are usually consumed along with pulses which are rich in those amimo acids. Pulses are complementary to cereals and that is reason why we find food combinations like Dal (lentils) with rice, beans with corn or tofu with rice.

Cereals contain essential minerals including phosphorus, potassium, magnesium and calcium. Amount of iron increases as the grain germinates. Other minerals present in small quantities include copper, zinc and manganese.  Bran of cereals is important source of vitamin B. Hence whole grain are considered better than refined cereals. Other vitamins present in cereals include vitamin E. Apart from all nutrients, cereal grains also provide enzymes which help in digestion and absorption of other nutrients in body.

Cereal carbohydrates are often complex and relatively hard to digest as compared to fruits or vegetables. Hence people recovering from illness or who are advised to be on lighter diet should switch from cereals for some time.

Processing cereals removes some part of beneficial bran from the cereal.  Nutrient content of processed or refined cereal is less than that of whole grain. Essential dietary fibers, vitamins, phytochemicals and minerals are removed in processes like milling. Also the glycemic index of the cereal increases during processing.  In some research, it was found that people with whole grain in their diet have lower risk of cardiovascular disease as compared to people with refined cereals. Research published in American journal of Clinical Nutrition recommends including servings of whole grain in diet.  Another research shows that antioxidant properties of wheat bran is 20 times as compared to wheat endosperm or refined flour.

Prevention of cancer: Research has been ongoing in field of health benefits of cereals and prevention and treatment of cancers. Cereal fibers and germ have been attributed for these health benefits. (Reference : 1, 2) Cereals are rich in phytosterols  which help prevent breast cancer. Many studies have showed that colon cancers can be avoided by consuming whole wheat products or any fibre rich cereals. Researchers in Uruguay in a study suggested an association between dietary sterol intake and decreased risk for the development of gastrointestinal cancers.

Thus, it is because of these health benefits of cereals, it is recommend to consume cereals regularly.