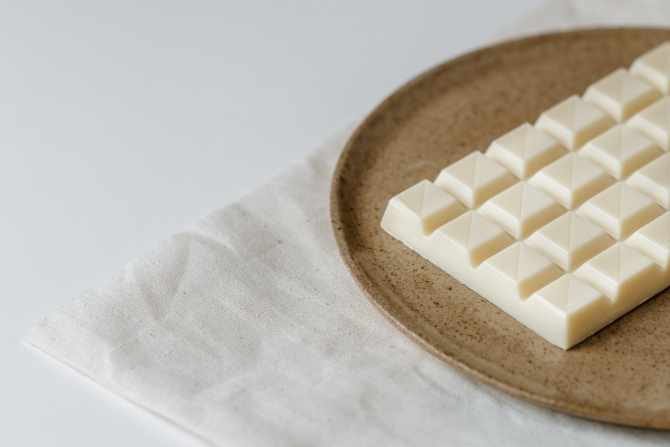 If you close your eyes and say chocolate, what do you see? It’s it a plate full of cocoa beans and dark or white chocolate running across your fingertips? If it is, you’re in for a revelation.

White chocolate is a form of chocolate that has no solid extracts of cocoa. How is it chocolate then, right? Well, the year was 1936 when Nestle introduced this chocolate to the world. This chocolate contained cocoa butter as an alternative to cocoa beans or powder. This lack of cocoa itself devoids the chocolate of its color. In turn, it acquires an ivory color that looks amazing and tastes marvelous.

What is white chocolate made from?

Don’t you absolutely love the taste of white chocolate? That there is the sole contribution of its ingredients. Made out of cocoa butter, milk products, sugar, vanilla, it is extremely delicious. It also contains lecithin, which is a fat emulsifier.

The nutritional content of this chocolate has been fixated by the USDA (The United States Department of Agriculture). According to them, 25 g of chocolate should contain 146kcal of calories, 10g of fat, 13g of carbohydrates. The carbohydrates should mainly come from sugar and 50 milligrams of calcium.

How to make white chocolate?

To make this heavenly combination, you need the following ingredients.

You may add cinnamon or ginger for added flavour.

The preparation procedure is given below.

READ  How to Boil Chicken Breast and Cook Delicious Recipes?

Apart from having an exquisite taste, this chocolate is loaded with a number of health benefits. These include:

What is white chocolate used for?

White chocolate finds use in multiple delicacies all over the world. Due to its dense ivory color, it is often used as a contrast to dark chocolate. It is also a key ingredient in many kinds of baked food such as cakes, biscotti, scones, etc.

How to store white chocolate?

The main ingredient of this chocolate, cocoa butter, is solid at room temperature up to 25°C. However, its melting point is at 35°C. Therefore, it should be put in airtight storage and kept in the refrigerator. The shelf life of chocolate in the refrigerator is about four months.

READ  Benefits of Roots coffee and why is it so popular?

Butter biscuit with cranberry and ginger

Due to its impeccable taste, nutritional benefits and uses, this chocolate have its fan following. There are a lot of people who prefer white chocolate over dark ones. However, we hope this piece tells you all you want to know to relish the chocolate to your heart’s desire.

Do you drink cranberry juice? If not, then you should start soon. Cranberry juice has several benefits and can keep...