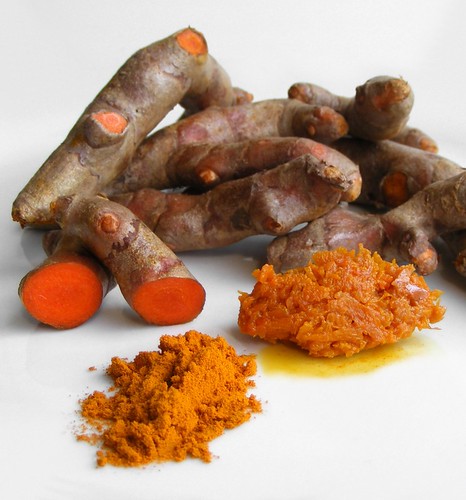 Curcumin, the main component of turmeric has shown to have a wide spectrum of biological actions, including its antiinflammatory, antioxidant, anticarcinogenic, antibacterial activities.

In Ayurvedic practices, turmeric has many medicinal properties and in South Asia it is used as a readily available antiseptic for cuts, burns and bruises.
Turmeric is extensively used as a spice, food preservative and colouring material in India, China and South East Asia.  It is taken in some Asian countries as a dietary supplement, which allegedly helps with stomach problems and other ailments.  It is popular as a tea in Okinawa, Japan. In Pakistan, it is used as an anti-inflammatory agent, and remedy for gastrointestinal discomfort associated with irritable bowel syndrome, and other digestive disorders. Milk taken along with turmeric helps in quick recovery, commonly taken during cold and cough.

It has been used in traditional medicine as a household remedy for various diseases, including biliary disorders, anorexia, cough, diabetic wounds, hepatic disorders, rheumatism and sinusitis. Turmeric is currently being investigated for possible benefits in Alzheimer’s disease, cancer, arthritis, and other clinical disorders.

Use of turmeric in Cosmetics

Turmeric is also used in a wide variety of skin creams and sunscreens. In south India, women apply turmeric to their body every Friday as part of tradition, where it is believed turmeric provides glow to skin and keeps some harmful bacteria away from the body.

Turmeric is currently used in the formulation of some sunscreens. Turmeric paste is used by some Indian women to keep them free of superfluous hair. Turmeric paste is applied to bride and groom before marriage in some places of India, Bangladesh, and Pakistan.

Tetrahydrocurcuminoids (THC), colorless compound present in turmeric, is believed to have antioxidant and skin-lightening properties and treating skin inflammations. THC is currently extracted and isolated from turmeric commercially.

Other benefits of Turmeric

Use of turmeric as Dye: Turmeric is has been traditionally used as fabric dye for dying Saris in India. However, it turmeric as dye fades when exposed to sunlight and thus makes a poor dye.

Turmeric is also used to deter ants in gardening

Anti Cancer potential of Turmeric: Initial research on anti cancer properties of turmeric has been promising. Studies suggests that curcumin may help prevent, control, or kill several types of cancers, including prostate, breast, skin, and colon. Curcumin has ability to stop the blood vessels that supply cancerous tumors from growing. Curcumin is also strong anti oxidant,  which helps protect cells from damage.

Health Benefits of Vitamin A – Retinol

The first nutritional deficiency disease to be clearly recognized was probably nightblindness. The ancient Egyptians, as mentioned in the Papyrus...