Kukicha twig tea (also known as Bancha twig tea), a body rejuvenating drink with tons of health benefits is a kind of green tea. It is different from other tea in that it is not made from the leaves but rather from the young twigs and stem of a shrub known as Camellia sinensi. The twigs are trimmed off from the shrub, steamed, dried, aged and then roasted to make green tea. Twig tea has somewhat of a nutty and sweet flavor.  This tea is full of health benefitting nutrients and has also been used in traditional Japanese and Chinese medicine for the treatment of many diseases.

In Japan, Kukicha is considered by many people as a peasant’s or poor man’s beverage. This is because it was regularly used as a drink by farmers who would sell the finest teas, mostly made from tea leaves, and keep the tea made from the twigs for themselves. However, many of the western countries have embraced this tea taking into consideration its amazing ability to alleviate health issues and promote longevity.

Kukicha Twig Tea is a rich source of many nutrients including vitamins, minerals, amino acids and antioxidants. Since it is made from the stems and young twigs, kukicha tea is high in vitamins and minerals that are used for the growth parts of the tea plant. It has been found to contain two times the amount of vitamin C in oranges and 10 times the calcium in milk. In addition to vitamin C, this tea also provides good amount of vitamin A, and B group vitamins. Kukicha Twig Tea also contains high amounts of minerals including iron, selenium, copper, zinc, manganese and fluoride. It is also an excellent source of catechins and flavanoids, which are potent anti-cancerous polyphenols. This tea also contains good amounts of tannins, as a result of which it acts as a good detoxifying agent. 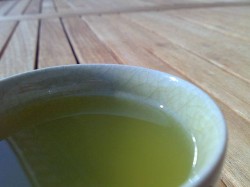 Like green tea, Kukicha Twig Tea also offers myriad health and medicinal properties. This tea is one of the most important elements in a macrobiotic diet, according to which balance is the secret to ones healthy well being. Given below are some of the health benefits of kukicha twig tea.

You can improve the health of your skin by drinking a cup of kukicha twig tea daily. This tea, which is high in antioxidants called catechins  eliminate the harmful free radicals and prevent any kind of damage they may cause to your skin. This helps in keeping your skin young and inhibits the occurrence of premature aging signs like wrinkles, pigmentation and fine lines. Kukicha Twig Tea is helpful in preventing sun damage and also in protecting your skin from skin cancer.

In addition to offering refreshing and rejuvenating effects to the skin, twig tea also helps in moisturizing and nourishing it, thereby making your skin look supple, healthy and flawless. The nutrients in kukicha promote wound healing and damages caused to the skin. Since it keeps the skin moisturized and nourished, you can say goodbye to dry skin. Topical application of kukicha tea is found to be very effective in soothing sunburns. It is beneficial in protecting your skin from different skin conditions like acne, eczema, psoriasis and rashes.

Most people have to deal with acidity which is often caused by eating less alkaline foods (fruits and veggies) and more of acid-forming foods such as eggs, meat, dairy products, sugar and artificial sweeteners. Prolonged cases of even mild acidosis can gradually lead to kidney problems, cardiovascular problems, weight gain, fatigue, poor immunity, bone and joint problems and premature aging. This is where kukicha twig tea can come to your rescue. It has alkalizing properties that helps in balancing the acidity levels and in preventing the above mentioned health problems.

High blood pressure and high cholesterol are two factors that are associated with increasing your risk of heart attacks and heart diseases. By controlling these two factors, Kukicha Twig Tea protects your heart and helps it function at its optimum best.

Kukicha Twig Tea is packed with antioxidant vitamin C, which helps in enhancing the strength of your immune system and in protecting your body against common colds and flu.

Kukicha Twig tea is found to be very effective in promoting weight loss because it helps in stimulating the production of bile, which improves the process of digestion, resulting in the easier digestion of fat.

All types of green tea happen to be rich in powerful antioxidants, which are popular for their cancer fighting abilities. Kukicha Twig Tea is also of no exception. This tea is loaded with flavonoid antioxidants and catechins that fight off the free radicals that damage your cells and cause diseases like cancer. According to a study published in Preventative Medicine, women whose daily intake of green tea exceeded 10 cups had a lower risk of developing cancer. Green tea is known to prevent several types of cancers including skin, oral, breast, lung, intestinal, colon, liver, pancreas, and prostate cancers. This anti-cancer effect of twig tea can be attributed to its ability to stop the growth and formation of cancer cells and initiate cell death of these cells.

Studies reveal that drinking a cup of Kukicha Twig Tea may help in preventing type II diabetes as it helps to lower the sugar levels in your blood by increasing the rate of glucose metabolism.

Enriched with potent antioxidants, kukicha twig tea shows detoxifying properties that promotes the optimum functioning of your kidneys and liver and kidneys, thereby removing the toxic wastes and by-products that get formed in your body.

Kukicha Twig Tea is a very good source of catechins such as epigallocatechin gallate. It has antiseptic properties and hence can be used for soothing oral infections, including tooth cavities and periodontal problems. Gargling with twig tea gargle two times a day will aid in faster healing.

Kukicha twig tea is found to be helpful in preventing abnormal cells from growing inside the cervix, thus offering protection from Human Papilloma Virus (HPV) infection.

Kukicha twig tea offers protection to the cells of your brain, thus helping to prevent conditions like Alzheimer’s disease.

Kukicha contains high levels of L-theanine, an amino acid that increases your brain activity and improves your general well being by promoting relaxation. It also helps in increasing your mental alertness, enhancing your mood, improving your concentration and protecting against stress and depression.

Kukicha twig tea is loaded with calcium, which plays an important role in keeping your bones and teeth strong and healthy.

How to prepare Kukicha twig tea

Like other green tea, kukicha should also be brewed in hot water, not boiling water. For best results allow the boiled water to cool to a temperature in the range of 70°C and 80°C (155°F – 180°F). Steep the tea for about 3 minutes. Green varieties of this tea are usually steeped for less than a minutes. You should keep in mind that steeping the tea for a longer period of time or brewing in hot water may make it taste bitter and unpleasant.

Although there are not many medical researches that look into the various health benefits of drinking twig tea, it has long been considered as a soothing and refreshing drink for your body and mind. Kukicha twig tea has almost no caffeine and hence can be enjoyed without worrying about the undesirable effects of caffeine. Drinking Kukicha twig tea is an easier and inexpensive way to improve your overall health and to stay protected from many kinds of diseases due to which it is gaining worldwide popularity nowadays. Next time you feel like having tea, try the unique aroma and sweet flavor of the nutritious and healthy Kukicha twig tea.

Often used as a substitute for almonds, Charoli seeds are full of health benefitting nutrients and an important element in...